Skip to content
Choose Your Country Please select the country where you would like to receive containers.

A Comprehensive Guide to the Reefer Container in Moving Perishables 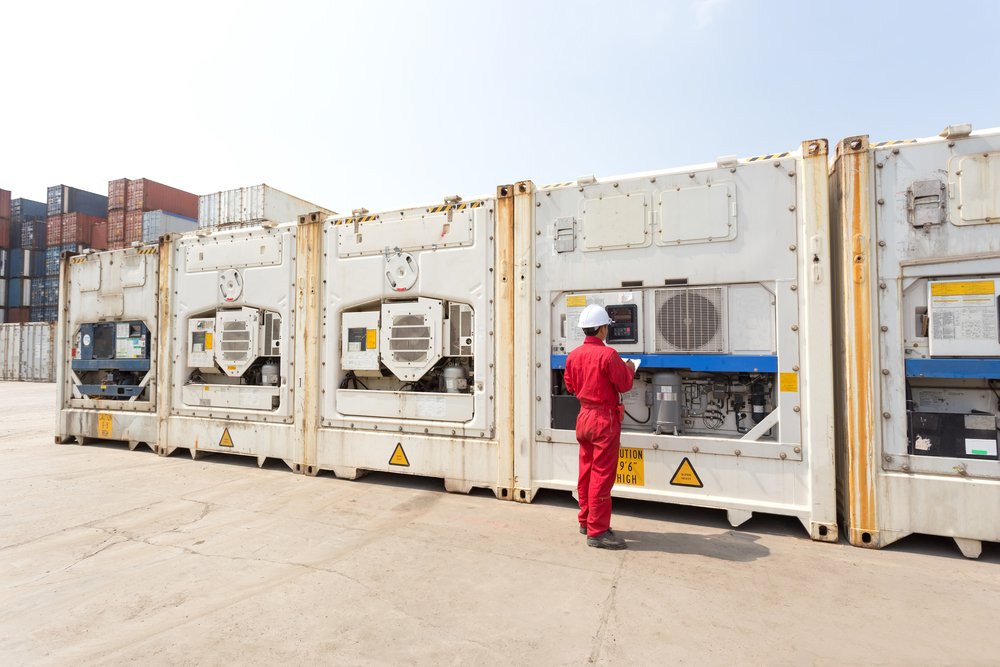 The industry of agriculture and food production constantly expands to meet the needs of the growing global population. In fact, according to a study published in the Journal of Agriculture, farmers produce food in volumes that are substantial enough to feed 10 billion people, which is about 1.5 times the entire population of the world.

However, not all types of agricultural products are readily available in every location. Hence, a large-scale distribution method consisting of importing and exporting occurs all over the globe. In line with this, it’s vital to note that unlike vacuum-packed processed goods, transporting fresh produce is significantly costlier and more complicated.

Several factors must be considered to retain the food items’ physical properties and freshness, including selecting suitable equipment for storage and utilizing specialized vehicles with temperature control. A particular contraption that’s widely used for transporting perishables is the reefer container. Below, we’ll discuss the container’s specific features and functions. But before we dive into that, let’s go through a brief overview of its history.

History of the Reefer Container

Storage units and vehicles that carry fresh produce are designed to adhere to treatment standards, such as proper load distribution and cold chain maintenance. In line with this, an array of containers are available for shipping perishable food items, with suitability depending on the load’s bulk and type of products it consists. The main classes are calorific, isothermal, and refrigerated vehicles.

Accordingly, refrigerated containers, or simply reefer containers, have started revolutionizing the industry of shipping since the late 1960s, but the concept behind their design can be traced back to 1876.

During the late 17th century, seafood became a popular but limited commodity due to transport challenges. To resolve this, a French engineer named Charles Tellier, widely pertained to as “The Father of Cold,” devised the very first refrigerated system which used methyl ether, a chemical component that can retain cold temperatures.

The system was similar in size to an engine, making it possible for three units to go onboard a steamboat called “The Frigorifique.” The shipping vessel was able to deliver exceptional results within a year of its introduction. Soon afterward, Ferdinand Carré, another engineer from France, improved the refrigeration function of the system, leading to a project that successfully transported a total of 150  tons of meat in 50 days.

From that point, refrigerated units continued to evolve over the decades with the help of technological advancements. Numerous companies also emerged, offering modern services and savvy solutions for shipping perishables.

How Does a Reefer Container Work?

According to Hariesh Manaadiar of Shipping and Freight Resource [KKM1] , reefer containers are simply big refrigerators used for moving temperature-controlled shipments. These include agricultural products like fruits, vegetables, meat, poultry, seafood, and dairy. Moreover, reefer containers are also used to transport non-food items such as pharmaceuticals, film, flowers, or any other product that requires a temperature-controlled storage environment.

Each type of cargo is treated differently—some may have to be shipped frozen or chilled, while others need to stay within certain temperature levels.  According to the Food Safety and Inspection Service (FSIS) of the United States Department of Agriculture (USDA), the primary reason why food items should be kept refrigerated is to prevent or slow the growth of pathogenic bacteria and spoilage bacteria. The former can cause foodborne diseases, while the latter can accelerate deterioration or affect the product’s properties (i.e. taste, odor, texture).

Reefer containers are equipped with the ability to maintain shipments at their respective temperature thresholds for the entire course of the transit. Other than hindering bacterial development, these special units can continuously provide efficient airflow to halt gas accumulation and control moisture.

How exactly does a reefer container perform the functions discussed above? To be more precise, it distributes chilled air through a T-shaped decking network, from the bottom or the floor of the unit to the entire area, thus producing a steady and uniform airflow across the container.

The power and consistency of airflow distribution are adequate for ensuring an optimal exchange of air with the products. Moreover, the airflow requirements significantly differ depending on the particular commodity, as well as its state (i.e. chilled, frozen, temp-controlled).

Other than sustaining coolness, a typical reef container also has a “warm up” feature for cargoes that need constant heat. It can maintain up to 80°F or 30°C, regardless of external weather conditions.

However, it’s important to note that a reefer delivery unit is not meant for temperature reduction. Rather, it’s focused on maintaining the temperature of a shipment that has been pre-cooled prior to storing.

Parts of a Reefer Container

Airflow – As previously mentioned, the supply of cold air comes from the bottom of the unit via a specially designed T-bar network that runs through the sidewalls and the floor, hence, the system is called “bottom-air delivery.”

Moreover, this certain type of cooling process is extremely helpful, not only for maintaining temperatures but also for preventing moisture loss. It’s been reported that a shipment of perishables must retain about 85 to 95% of its moisture level to fight premature wilting or other forms of deterioration.

Buffer Plate – The buffer plate is attached to the back of the reefer container. Its main purpose is to promote proper circulation of airflow. Without the buffer plate, multiple issues may arise, such as shortened cycle of airflow and freeze damage. The areas with weakened airflow can also be exposed to heat.

Air Vents – Chilled products need efficient ventilation for the removal of respiration gases that they produce, such as ethylene and carbon dioxide, which can accumulate and get trapped, consequently leading to accelerated ripening and development of unpleasant odors. The ventilation system also helps remove heat through a consistent circulation of internal air. Additionally, fresh air is introduced, minimizing the volume of gases.

For the duration of the land transit, the air vents must remain closed to prevent pollutants or any sort of contamination (e.g. gas emissions and diesel fumes) from entering the container through the vents. Upon arrival at the terminal, the vents must be re-opened to the necessary setting as the reefer is switched on.

Plugs/Power Sockets. Many reefer container models have ceeform plugs. Tampering with these plugs is dangerous, and in a worst-case scenario, may lead to electrocution. However, the pins may be cut when they aren’t suitable for the plugs used.

Probes – Probes are utilized for digitally recording cargo temperature. Accordingly, the method of probe placement varies depending on what measurement is needed. It can be taped outside of the carton box and into the vent hole of the box near the item for measuring ambient temperature. However, if the actual temperature of the product is needed, a probe can be fully inserted into the item itself.

Probes are especially important for transporting products that have undergone cold treatment, also pertained to as “steri shipments.” Particular countries such as Nigeria, China, and Japan require certain fruit types to be cold treated because they potentially carry harmful pathogens.

Cold treatment entails pre-cooling of the product to reduce its temperature to the required level. The carriage temperature will then be monitored through the steri probes, which are inserted into the fruit’s pulp.

Before being packed into the delivery unit, the temperature of the products is lowered separately in an appropriate facility. The cooling of the items cannot be performed when they’re already loaded, because as explained previously, reefers are not designed to cool the shipments they contain but rather maintain a certain temperature. To add, when the shipment is stuffed at a temperature beyond the desired carriage temperature level, the reefer container can be strained and break down over time.

The only instance when cargo can be cooled and stuffed simultaneously is when the “cold tunnel concept” is applied. This cold tunnel is a narrow duct set between the container and the cold store, which is meant to stop the infiltration of ambient air. In the event of loading in a cold tunnel concept, the reefer machinery can be operated during stuffing.

It’s advised to avoid mixing various commodities under the same load, as cargoes have their own distinct temperature thresholds and air exchange requirements. However, different types of products can be stored together in the same reefer container if they are compatible in terms of factors like optimal humidity levels, required carriage temperature, and gas production.

The type of unit used must also be suitable for the items being stored. For instance, when it comes to pip fruits such as apples, pears, and quinces, the materials used are pallets and cardboard or plastic crates. As for garlic and onion, they are often transported in plastic and wooden crates, plastic sacks, trays, or even covered in gauze.

Stuffing the load into the reefer container must be completed as fast as possible to prevent ambient temperature from affecting the shipment. The packages should also be stowed and placed in the container with enough spacing in between to avoid restricting airflow circulation. In addition, air pockets must be minimized, and wedges may be used to tighten the stacks. Lastly, the shipments should not be set too near the container door to avoid a shortened airflow cycle.

Here are other measures that need to be taken before transporting:

Moving perishables is a complex process involving systematic steps. Each one is essential to ensure that the products will be in optimal and palatable condition upon arrival to a port or terminal, for the safety of the consumers.

If you have a shipping business and require high-quality reefer units, BSL’s top-notch refrigerator containers are available for sale at a varied range of price points. Check out their website’s product guide for more details.

This website uses cookies to improve your experience while you navigate through the website. Out of these, the cookies that are categorized as necessary are stored on your browser as they are essential for the working of basic functionalities of the website. We also use third-party cookies that help us analyze and understand how you use this website. These cookies will be stored in your browser only with your consent. You also have the option to opt-out of these cookies. But opting out of some of these cookies may affect your browsing experience.
SAVE & ACCEPT